IHS Makit: Trackers To Account For A Third of PV Installations

New analysis predicts more than 150 GW of tracker capacity will be installed in the next five years – around a third of all ground mount projects up to 2024. Rapid growth in Europe, the Middle East and Africa; and the better cost structures possible from combining trackers and bifacial modules are singled out as key trends.

Thanks in part to the improved project economics offered by bifacial modules, IHS Markit predicts a surge in tracker installations over the next five years.

Business intelligence firm IHS Markit says more than 150 GW of solar capacity will harness tracker technology up to 2024. While the U.S. is expected to remain the largest tracker market, rapid growth in other regions will drive the technology to feature in around a third of all new ground mount installations.
In its Global PV Tracker Market Report – 2019, IHS Markit forecasts an upsurge in installations across Europe, the Middle East and Africa (EMEA), led by growing demand for utility scale PV in southern Europe and the Middle East.
The report predicts increased competition in the region with dominant suppliers PV Hardware and Soltec – which have taken more than half the EMEA market to date – ceding ground to European rivals such as Convert and Ideematec and with Trina Solar subsidiary NCLAVE scaling up. U.S. giants Nextracker and Array Technologies are also moving onto the two Spanish giants’ turf.

Regional breakdown
Despite rapid growth in the EMEA region, the Americas will continue to represent the largest market, led by installations in the United States and Mexico. Asia may represent the smallest of the three mega-regions the report slices the market into but still has significant tracker expectations, with Australia, China and India all forecast to appear in IHS Markit’s top ten tracker markets list and to account for a combined 30 GW of capacity. 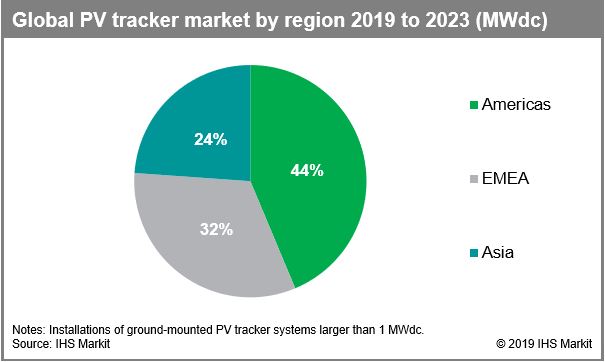 Rising demand for bifacial modules is also helping boost demand for trackers, thanks to their potential to boost panel output even further and drive down the cost per watt for tracker systems.

“The cost delta between bifacial and monofacial modules has narrowed in recent years,” reads the report. “By 2020-2021 IHS Markit forecasts the price gap will become relatively insignificant compared to the efficiency gains.”